Alumni Reflection: An Ode to my Champions 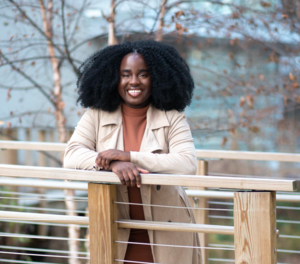 SJPDS Alumna, Anna Gifty Opoku-Agyeman ' 07, looks back across her educational journey and shares how St. John’s empowered her to become the best version of herself.

An Ode to my Champions: Alumni Reflection by Anna Gifty Opoku-Agyeman

“Every child deserves a champion—an adult who will never give up on them, who understands the power of connection, and insists that they become the best that they can possibly be.” - Rita Pierson

Graduating from St. John's Parish Day School as the first Black-American Lower School student has fundamentally shaped me. I began my formative years at two different schools. I went to a public school in the late mornings at Swansfield Elementary and then I spent my afternoons at Head Start, an educational program for children of low income working families. Around the time of pre-kindergarten graduation, my parents received a call that changed my life forever.

I remember visiting the classroom, meeting my eager pre-kindergarten students, and being introduced to the legendary Judy Robinson, former Head of the Preschool. I had just turned five. I came in later that year to finish up pre-kindergarten and unlike Swansfield and Head Start, I recognized, almost immediately, how different I was from everyone. My skin was darker; my hair was natural; and my heritage was different. All of these personal attributes made kindergarten a difficult transition, but set me on a journey filled with invaluable lessons in self-confidence and worthiness. Thankfully, Ms. Anna Puma was hired as the new Head of the Lower School when I enrolled in St. John’s. Ms. Puma was and is a light. She was always smiling and encouraging of each one of us, especially me. I remember how she would pull me aside, and remind me how much of a leader I was and was going to become all while giving me a big, warm hug. Years later, I learned that Ms. Puma had supported me throughout the entirety of my schooling at St. John's. She had advised my parents and I before her departure to look into what would later be the middle and high school I would graduate from, Glenelg Country School, which I attended with fellow alum, Marguerite Madden. She was one of my first champions and has since attended every graduation ceremony in my life.

Over the course of my time at St. John’s, I was taught by wonderful educators: Mrs. Franey, Ms. Rotella,  Ms. Rose, Mrs. Schoenhut, Ms. Currie, Ms. Rath, Mrs. Perez, Mrs. Klingaman, Ms. Day, Mr. Yates, and Mrs. Bentivenga. Their dedication to providing my classmates and I an environment where we were allowed to ask questions and embrace ourselves fully is why I am the woman I am today. I will be remiss if I did not acknowledge the Before and Aftercare teachers I spent much of my time with; it was there that I learned that the joy and love I bring into a room is my greatest asset in any space I chose to enter.

Each of my educators at St. John's embodied servant-leadership, which I define as leadership rooted in humility, love, and understanding. As a graduating fifth grader, I was unsure whether I would find champions as incredible as the ones I had come across and how their dedication to nurturing young people would impact me later in life. I was unsure if I would ever find educators who relentlessly encouraged me to stand in my truth and own my voice. There is no question that the teachers and staff at St. John’s set the foundation for the servant leadership I display in communities I step into today.

Last May, I graduated cum laude with a Bachelors in Arts in Mathematics and a minor in Economics from the University of Maryland, Baltimore County where I was a Meyerhoff Scholar, MARC U*STAR Scholar, Honors College Student, and student leader in the National Society of Black Engineers and the S.T.A.R. STEM Program, which educates fifth grade students from Baltimore City about science, technology, engineering, and math. In my final year of college, I co-founded the first American non-profit organization for Black women in economics and related fields, the Sadie Collective, which has been recognized by NPR, the New York Times, and the Wall Street Journal among other media outlets. Our organization uniquely addresses the pipeline and pathway problem for Black women in economics, finance, data science/analytics, and public policy. I currently serve as the Chief Executive Officer. This past year, I accepted an offer to become a Research Scholar in Economics at Harvard University, a pre-doctoral fellowship for minorities. When I take stock of my life thus far, one thing is clear: St. John’s empowered me to become the best version of myself and now I hope to do the same for others.

Anna Gifty Opoku-Agyeman (class of 2007) is an emerging researcher and entrepreneur hailing from Ghana and Maryland. She was in our very first Lower School graduating class and is also the first African-American LS student to graduate from SJPDS. After St. John’s, she attended and graduated from Glenelg Country School where she received multiple awards for leadership and service. Following high school, she graduated cum laude from the University of Maryland, Baltimore County with a B.A. in Mathematics and a minor in Economics as a Meyerhoff/MARC U*STAR Scholar and Honors College Student. She is currently attending Harvard University as a Research Scholar in Economics with an appointment at the National Bureau of Economic Research as a Visiting Research Fellow.
Anna Gifty is best known for co-founding The Sadie Collective, the first non-profit organization that builds a pipeline for Black women in economics and related fields. The Collective's work has been featured by several media outlets, recently The New York Times, NPR, The Economist, and Wall Street Journal. St. John’s is very proud of Anna Gifty and her accomplishments!

Read about the work of the Sadie Collective on Wikipedia and their website.